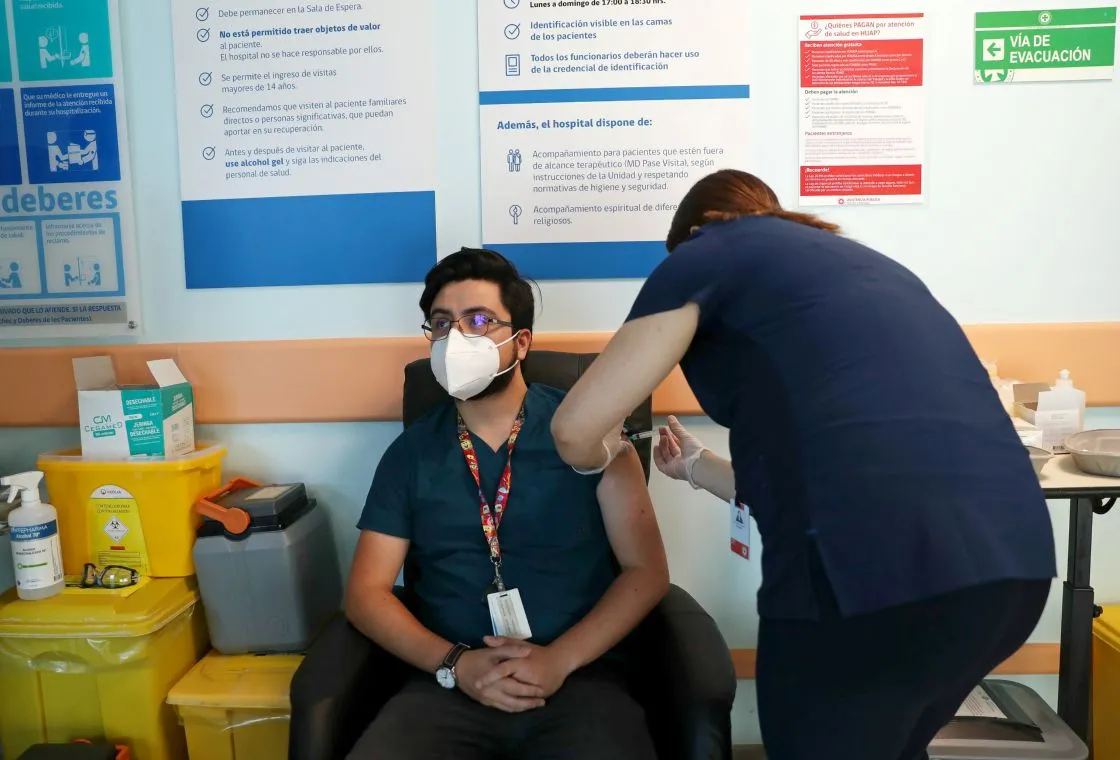 On average, Chile vaccinates more than two hundred thousand people per day, since last February 3 and hopes to achieve two million inoculated before the next 72 hours.

Even the deadlines that the government itself had proposed have been exceeded. In the opinion of health specialists, one of the main reasons is due to the good experience in immunization programs that the country has. The truth is that beyond historical calculations and analysis, Chile became in a few days a role model for its successful vaccination plan against Sars-Cov 2.

According to the latest report, this Thursday, Chile had already vaccinated 1,550,594 people, a number that will rise this Friday with the usual two daily reports delivered by the Ministry of Health (MINSAL). Intrepid advance that positions this country as the nation with the highest percentage of its population vaccinated in the region. Such is the effectiveness of its deployment that the financial giant JP Morgan announced this week that if Chile maintains this pace, it will be the first emerging country to achieve immunity by the end of 2021.

According to the record of the Our World in Data site, it is indicated that Chile is the regional leader in this matter, and that it even surpasses countries such as China and Brazil in proportion to 100 inhabitants according to the number of daily vaccinated.

Thus, it is projected that during the first quarter, Chile will exceed 5 million vaccinated people and reach 80% of its population before June 2021, that is, some 15 million immunized people.

However, the good results of the Chilean vaccination process against the coronavirus is not a coincidence. So far there are two laboratories that have provided it with vaccines: Pfizer BioNTech and Sinovac. So, how did the plan that is recognized today as a model to follow started? Since when did the negotiations with these pharmaceutical companies begin to ensure the doses that this country has?

May 2020 was one of the most critical months in Chile in terms of the impact of the pandemic. According to figures of the time, 99,688 of the 723,493 infected in total were registered during these days, with a consequence of 827 deaths of the 19,262 deaths reported during this month.

While the pandemic was hitting hard and the possibility of a vaccine was still distant, a group of health authorities planned the strategy to anticipate the obtaining of agreements with those who in a future not yet determined would become the main suppliers of the drug.

Authorities made up of an interdisciplinary group arranged by the then Minister of Health, Jaime Mañalich, together with the Ministry of Sciences and the Foreign Ministry, arranged meetings with a total of 11 laboratories. After a short time, only five of them advanced in agreements. The idea of ​​the Chilean Government was to establish prompt communication with the entities. Thus, as their vaccines were approved by the regulatory organizations in their own countries, they quickly agreed to sign a pre-contract. The months progressed and, with the change of Minister of Health included, the negotiations did not stop.

To achieve urgent agreements, several meetings were necessary, first virtual and then with trips that included the city of Abu Dhabi, in the United Arab Emirates, the main center of operations for Pfizer and BioNTech and where confidentiality clauses and “letters of confidence” were established. intentions ”to establish clinical trials in Chile in exchange for“ special conditions ”that would guarantee a considerable number of doses, immediate and at a low price.

August was the peak month for negotiations. The “small area” was entered and coordination was established with the Latam and MartinAir airlines, which were requested to provide a special logistical collaboration that was important to seal the agreements. The use of containers, highly refrigerated and unique in their kind, was required to transport the doses. A fundamental requirement that Chile was able to guarantee with public-private agreements with transportation companies.

At the end of September, the MINSAL authorized the development of two clinical studies of the vaccines of Sinovac Biotech Co., Ltd. and Janssen Pharmaceutical Companies, which gave free rein to the development of tests and quality reviews in their territory. These clinical trials began between the end of October and the first days of November, with volunteers whose number did not exceed 3,000. The vaccines were slowly approaching.

How much each country vaccinated

Press the title of each column to sort the table according to that category:

At the end of July 2020, the Catholic University of Chile (UC) and the Millennium Institute signed a clinical trial agreement with Sinovac. This was the first contact with the CoronaVac manufacturing company so that clinical trials could begin in November of the same year.

This approach was crucial for the Chilean government to reduce the final cost of the vaccine, which in other countries sells for $ 14 per dose. The foregoing assured Chile to agree to the provision of 10 million doses in a first stage, and also reserve a second “purchase option” for another 10 million doses.

Despite being very confidential information, from within the Government it transpired that the health authorities were at stake for the Sinovac vaccine project, as it had a good evaluation, according to data from the portfolios that included indications of “less risky” . In addition to the support of the essays that were developed at the Catholic University of Chile and whose opinion confirmed its well-aspected future.

The complex negotiation with Pfizer

In July 2020, parallel to the progress was negotiated with Sinovac, also with Pfizer-BioNTech through its general manager in Chile, Marta Diez. However, preliminarily, the company required signing prior contracts before making a reservation. A deal that for Chile was novel and therefore difficult to close, because it had not experienced this contractual figure with other laboratories.

The negotiations took longer than expected. In addition, because the contract had to be subject to United States law, which led the Chilean government to hire a New York law firm to facilitate the progress of the agreement. In addition, Chile sought to treat it as a “middle-income country” in the agreement, so that the value set would be less than that offered to developed countries. For this, it was necessary to send documents from the Chilean Central Bank that proved that the economy of this country had regressed 8 years after the social crisis of 2019 and the subsequent health crisis.

Despite fears and mistrust, the contract with Pfizer-BioNTech was signed in September for the purchase of 10 million vaccines.

The arrival of the first doses

As announced by President Sebastián Piñera, on December 24, 2020, the first doses of the Pfizer vaccine arrived. Chile was the second country in Latin America to receive the drug, after Mexico. “These vaccines are a light of hope that will illuminate the way,” said the president after supervising the first shipment arrived on Chilean soil.

In the same scene of the reception ceremony, Piñera announced that during the following week another 10,000 doses would arrive, thus complying with the first 20,000 promised vaccines. “Many people have worked hard for a long time to be able to assure our compatriots that we will have a safe, effective and timely vaccine,” explained the Head of State.

Days later, on January 20, 2021, the “exceptional” use of the vaccine, the CoronaVac of Sinovac, was also approved by the Institute of Public Health (ISP) and then its administration in older adults was approved. On January 28, the plane with the first shipment with 1.9 million doses was received and on January 31, the landing of another plane with a second shipment with another 1.9 million doses was announced, anticipating that it is expected to have 10 million this vaccine in the short term, as established in the contracts signed between the pharmaceutical company and the Chilean government.

In conversation with Infobae, Dr. Eduardo Savio, coordinator of the Immunization Committee of the Pan American Association of Infectious Diseases, assured that Chile’s immunization plan against COVID-19 is a model to follow in the region. “They implemented a comprehensive program, which is very fast-acting and with the assurance that they are receiving vaccines in a timely manner from providers, something that doesn’t happen to just anyone. This is especially important because today more than ever it is important to vaccinate populations quickly. A rapid implementation campaign that can generate the herd immunity that we all want, before emerging SARS-CoV-2 mutants have a chance to really invade and begin to disrupt the efficacy of vaccines as has already happened in South Africa with one of them”, he said.

With these data in hand, the Chilean vaccination plan aims to move forward with speed. In total, there are 35 million vaccines that are already reserved by Chile to apply to its population: 10 million are from the United States’ Pfizer-BioNTech, another 10 million from the Chinese Sinovac and the rest from AstraZeneca, Johnson & Johnson and the Covax platform.

For the last week of February and early March, the arrival of three new shipments of the Chinese vaccine, Sinovac, is expected. This was announced on Thursday by Health Minister Enrique Paris. “Last night we had a meeting with Sinovac and they assured us three shipments of more than three million doses in each one, that is, we are going to have nine million new doses. Two more shipments arrive in the last week of February and one in the first week of March”, he said.

He also referred to the delay in the arrival of Pfizer vaccines, announcing that it is expected that this February 15 the arrival of shipments will resume. “They are going to replace the vaccines that they had not been able to deliver to us, I estimate there must be about 400 thousand more doses”, he added.

In addition, the arrival of the 4 million AstraZeneca vaccines set in a pre-contract signed last November is expected in April. While 7.6 million doses of the Covax vaccine are expected to land that same month, along with another shipment of 4 million vaccines from Johnson & Johnson’s Janssen.

With all of the above, the health authorities do not rule out that negotiations with Novavax will begin in the very near future, a North American laboratory linked to the Serum Institute of India with which Chile already has previous contacts to add more vaccines against the coronavirus. During the last hours, also, an agreement was officially announced with the Russian laboratory that created Sputnik V.

chevron_left The Silence of the Lambs: the disturbing story that no one dared to film
WordPress is the content manager of 40% of the websites on the planet chevron_right